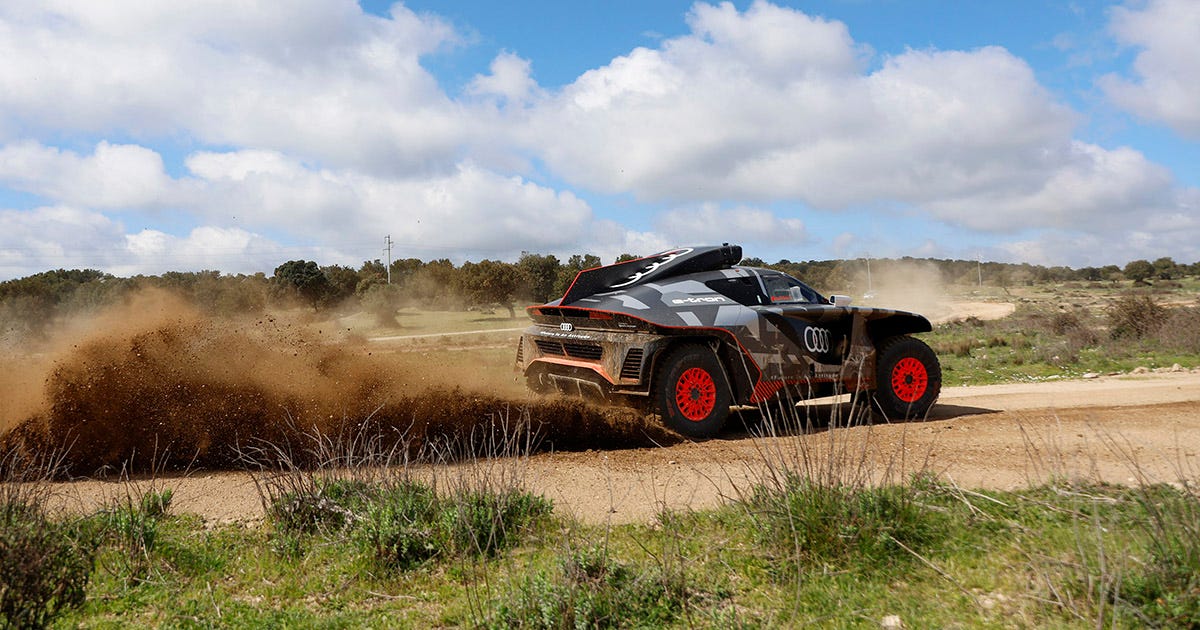 
I’ve driven some pretty cool gas-powered cars in off-road races, from my own Class 1600 buggy in events in California to a Class 11 Volkswagen Beetle in the Baja 1000. I’ve also competed in stock electric vehicles, including running a Rivian R1T in the Rebelle Rally (twice) and a Volkswagen ID 4 in the Mexican 1000. But I’ve never been able to put these two powertrain types together — until now.

The RS Q E-Tron is a hybrid off-road racer, and Audi entered three of them in this year’s Dakar Rally in Saudi Arabia. Power comes from a 52-kilowatt-hour battery that’s charged by a 2.0-liter turbocharged I4 engine. So, yes, this Audi still burns gas, but only so it can charge the battery. Remember, Dakar race stages can sometimes exceed 500 miles; current battery technology just can’t provide that kind of range. Per Dakar rules, the RS Q E-Tron is limited to just 386 horsepower.

Of course, my test drive isn’t anything as grueling as what this car goes through in Dakar. Instead, I’m in Sardinia, with professional Dakar navigator Emil Bergkvist riding shotgun. My task is to get through a sighting lap, three hot laps and a cooldown lap on a short rallycross course.

First, though, I need to get the lay of the cockpit. There’s a screen in front of me (with my name on it!), showing information about tire pressure, speed, the battery’s state of charge and whether I’m in forward or reverse gear — the essentials. A screen in the center of the cabin displays the same information, plus brake bias and the remaining fuel. This display also has controls for the wipers, hazard lights and, yes, the air conditioning. It gets hot out there.

The steering wheel has eight buttons, but I won’t have to use things like the turn signals, horn or speed limiter, so I put most of these out of my mind. Instead, I focus on the placement of the huge brake and throttle pedals under my feet. With everything in check, Emil gives me the OK to go, and I head out toward the course.

The rallycross stage has plenty of turns and there are a lot of opportunities to get this all-wheel-drive race car sideways. Just not too sideways. After an initial sighting lap, I quickly realize it’s tough to know exactly where the E-Tron’s big BF Goodrich tires are, only that they are way outboard of the cockpit. It’s also tough to look where I want to go because the E-Tron’s A-pillars are massive. I find myself trying to move my head to get a better line of sight in turns, but my race seat doesn’t allow for much movement — and I’m not even wearing a head-and-neck restraint.

Lifting off the throttle before my first turn, I expect the electric drivetrain to provide some regenerative braking, but instead, the car coasts. Fortunately, I’ve lifted early enough to left-foot brake and get the car slowed down for the corner. Emil tells me the E-Tron does have some regenerative braking, but it’s been turned off for my test session, which actually makes things a little easier, since mechanical brakes are what I’m used to having in my own race car. But I’m a little bummed — I want to know how much regen this thing provides to get the rig slowed down.

The RS Q E-Tron’s soft suspension allows for a veritable crap-ton of body roll, but after a few corners, I get used to all the motions. Emil coaches me a little, telling me to get back on the throttle quicker than I think, even before the suspension completely settles. Before long, I’ve got the E-Tron drifting a bit, countersteering to execute perfect slides.

I’m a little surprised how light the steering is, but frankly, if I had to pilot this thing for hundreds of miles every day for 12 Dakar stages, I’d like a break from heavy steering, too. I could steer the E-Tron with one finger if I wanted to, and I never have to seesaw the wheel to get it to turn in. (OK, maybe once when I cooked it too fast and understeered into a corner, but that’s my own damn fault.)

The gas engine is programmed to turn on when the battery reaches a certain state of charge, but the co-driver also has control. Halfway through my session, Emil flips a switch and the drone of the gas engine fills the cabin.

Right away, I hate it. The gas engine is loud, and because it’s only working as a generator, it doesn’t rev in line with my acceleration. It just hums at a constant speed, sending power to the battery. Again, this is the only way Audi could really make the RS Q E-Tron a contender in a long rally stage, but I much prefer either the futuristic whine of a purely electric powertrain, or the rumble of a gas engine working its way through the revs.

On that note, for future races, swappable batteries could be a solution, as my buddy Kyle Seggelin designed for his home-built electric Toyota 4Runner for the King of the Hammers off-road race. But swapping batteries still takes a ton of time. In a world where 50 gallons of fuel can be dumped into a car in under 30 seconds, Audi would lose precious time swapping out batteries. Having a gas engine charge the batteries guarantees propulsion for the entire stage — no external charging necessary.

In this year’s Dakar Rally, Emil and his driver, Mattias Ekström, did the best of the three RS Q E-Trons, earning a top-10 finish. However, teammates Stéphane Peterhansel and Edouard Boulanger recently won the Abu Dhabi Desert Challenge in the RS Q E-Tron, and the car will go on to compete in the Andalucia Rally in Spain this June. And of course, there’s always Dakar 2023.

The RS Q E-Tron is a great showcase for how existing internal combustion and battery technologies can work together in a race application. Me, though? I’ll stick with pure gas or electric.

Editors’ note: Travel costs related to this story were covered by the manufacturer, which is common in the auto industry. The judgments and opinions of CNET’s staff are our own and we do not accept paid editorial content.