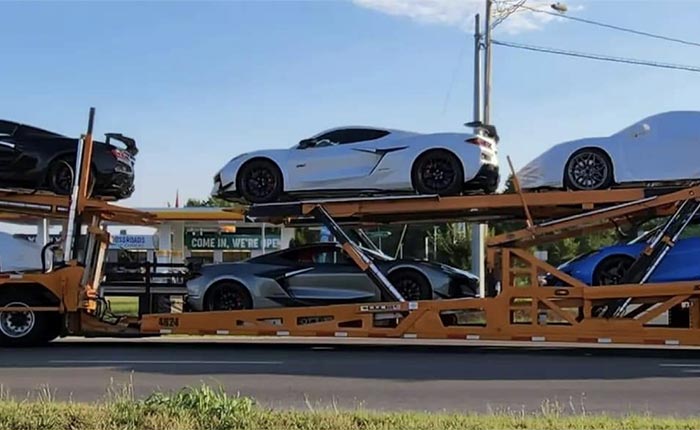 Jack Cooper handles the shipping of Corvettes from the Bowling Green Assembly Plant to Chevrolet dealers across the US and Canada. Today, this shipment was spied leaving the assembly plant with five Z06s onboard and one of them was the 70th Anniversary Z06!

We have yet to see the 70th Anniversary Z06 Corvette displayed in a public setting, but there has been an “over the fence” sighting and now this one on the transporter.

Also on the transporter are two Black Z06s with high wings, but we can’t really tell if they are wearing the 70th Anniversary badge on the sides.

One interesting note is that Rapid Blue Z06 has a high wing and it’s on the bottom level with the top level not that much further above it. Clearly, clearance isn’t an issue, Clarence!

We’ve recently seen the Z06s with the high wings being shipped with the transport covers on them. Now, these five C8Zs are headed most likely to Detroit with no covers. Even the first Stingray 70th Anniversary models spotted on the transporter were wearing the transport covers. We wonder why these aren’t being protected?

Thanks to bear.127 and the MidEngineCorvetteForum.com for sharing the pics!